Posted by Inclinator Co of California 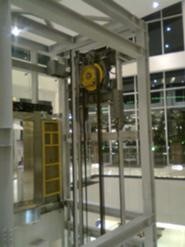 Machine Room Less Elevators (usually shortened to as M.R.L. or MRL) are a type of traction elevator which do not have a machine room at the top of the hoistway.

The machine-room-less elevator is the result of technological advancements that often allow a significant reduction in the size of the electric motors used with traction equipment. These newly designed permanent magnet motors (PMM) allow the manufacturers to locate the machines in the hoistway overhead, thus eliminating the need for a machine room over the hoistway. This design has been utilized outside the USA for at least 15 years and is becoming the standard product for low to low-mid rise buildings. It was first introduced to the U.S. market by KONE. Product acceptance was initially slow in the U.S. market because of its initial, limited applications, its inability to meet U.S. code requirements, and the limited number of manufacturers offering an equivalent product.

In the past three years elevator manufacturers have overcome the obstacles to acceptance of the MRL product in a limited number of jurisdictions. All of the other elevator manufacturers are now marketing their versions of the MRL, and the product offering has been expanded to include many of the more popular elevator sizes and speeds. In addition, local code officials have been somewhat resistant to the technology; a few are now allowing the equipment to be installed in their respective jurisdictional areas, at least on a case by case basis.

Intent of the Design

M.R.L. elevators do not have a fixed machine room on the top of the hoistway. Instead the traction hoisting machine is installed either on the top side wall of the hoistway or on the bottom of the hoistway. The motor is installed using a permanent magnet which “sticks” the motor permanently and works with a Variable Voltage Variable Frequency (VVVF) drive. Some of the hoisting machines are using gear-less synchronous motors instead of conventional induction motors. This design reduces the need for a fixed machine room, thus saves much building space. All traction M.R.L. elevators are gear-less traction.

The idea for a machine room less elevator was first pioneered by the Finnish-based elevator manufacturer, KONE, which launched its first M.R.L. elevator product line “MonoSpace Elevator” along with its signature hoisting machine “EcoDisc” (the motor is the shape of a big green round disk). Soon, many rival companies began to make their own M.R.L. products due to the popularity of KONE’s MonoSpace elevator.

In 1998, Toshiba launched its first M.R.L. products “SPACEL-UNI” under a partnership by KONE (and “Order-Spacel” which is based off “EcoDisc”). In 1999, Mitsubishi invented a bottom drive M.R.L. elevator called “GPQ” series, with the hosting motor located on the elevator pit. Nowadays they make an M.R.L. elevator called “Elenessa” for both Asia and Europe, which the hoisting motor location is adjustable in the shaft. The Elenessa product line was first introduced in 2001 to replace its previous GPQ product line.

Otis launched its M.R.L. elevator product Gen2 in 2000. Unlike most products, the Gen2 elevator uses flat steel rope belts instead of conventional steel ropes. In 2004, ThyssenKrupp introduced its first M.R.L elevator, named ISIS, which uses Kevlar belts. However, this product was discontinued after the Seattle Children’s Hospital incident and was replaced by a new M.R.L elevator in 2008 named Synergy.

In 2006, one of the ThyssenKrupp ISIS elevators in Seattle’s Children’s Hospital had its Kevlar ropes snap due to overheating. The elevator car fell from the 7th floor to the 3rd floor and came to a complete stop after the emergency brake engaged. No one was injured. The elevators were taken out of service a few days later and an inspection wan conducted. It was determined the Kevlar Ropes were insufficient for the application in elevators.

Based on experience with each product application, its reliability and serviceability, Lerch, Bates & Associates currently approves the use of the Otis Elevator Company MRL elevator (Gen2) and the KONE Incorporated MRL elevator (MonoSpace/EcoSpace) in certain applications. It has been their experience other MRL elevator products have intermittent issues.

It also should be emphasized that the critical building requirements vary significantly to accommodate different manufacturers’ MRL elevator product. This is due to different methods of cab suspension, and locations of the machine, controls and counterweight.

In general, the MRL elevator product still requires the original equipment manufacturer to maintain the product after turnover. Variances issued in many jurisdictions require the installation company be the only service and repair company for that conveyance. Consequently, Lerch, Bates & Associates urges their clients to secure long term maintenance pricing when soliciting new equipment bids. This method of procurement will ensure a competitively priced maintenance program, as well as allow for a beneficial life cycle cost comparison to other more traditional elevator products.

The State of California recently held a public meeting in regard to adopting new codes for Conveyances (Title 8, Group V) in which they are requiring much more stringent adaptations and additions to the ASME A17.1 code. These requirements will certainly make it more difficult to design and install MRL’s successfully within the State.

TL Shield & Assoc., Inc. manufactures our own Commercial and Residential elevators. We are here to help guide you through your project’s elevator needs. Call us today at (800)954-3887 or email us at info@tlshield.com.